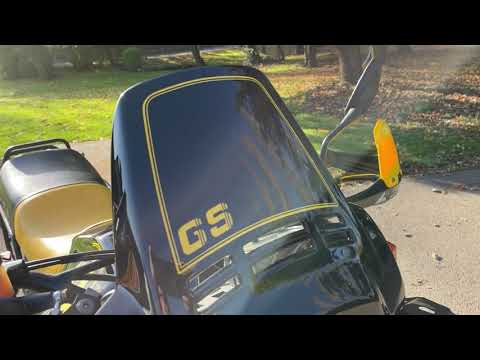 See it in action

In the late Seventies, conventional wisdom said that any motorcycle with off-road aspirations was small, light and had one cylinder: 41 years ago, BMW “escaped” this idea and launched a bike, the R80G/S, that created a whole new category — the large adventure/touring sportbike.

Often emulated, never quite rivalled, BMW’s GS series remains the benchmark for “big trailies”: bikes inspired by the GS range since 1980 include the Cagiva Elefant, Triumph Tiger, Moto Guzzi Quota, Aprilia Caponord, KTM Adventure, Suzuki V-Strom, and Honda’s trio of twin-cylinder trailies; the Transalp, Africa Twin and Varadero. But how did the GS come about?

Several factors came together to create the R80GS and R100GS. First, the original “G/S” designation (“gelande/strasse,” or terrain/street) implied the bike was intended for off- and on-road use. BMW’s own market research showed that G/Ss were used 98 percent on the street, so the new bike’s personality would be steered that way. Second, the Monolever rear suspension had drawn criticism: torque reaction from the big boxer engine would “jack up” the rear end under hard acceleration, upsetting the handling. BMW’s answer was the Paralever, which added a torque rod to the outer casing. Together with revised bodywork, the R80GS and R100GS (“gelande-sport”) were launched for 1987 and the legend was born.

Which brings us to this 1989 R100G/S Finished in the highly desirable Bumblebee paint scheme. BMW revived this yellow/black paint for its 40th anniversary models, because GSphiles like it so much. This bike has seen it upgraded to overland specification and has travelled from the UK all the way to North Africa and back!!

It has a 43-litre fuel tank with custom paint to replicate the original paint scheme, the front forks have upgraded internals and the rear shock has been replaced with a WP item. There is a Skid plate on the front of the frame and on the centre stand. There is a full racking system with original aluminium pannier’s (not shown in the photos) and rear rack, Auxiliary lights and it has had a Keihan stainless steel exhaust silencer installed. The bike has been extremely well cared for and runs well. It has just had the bodywork repainted to bring it back into top condition and match up the tank with the original “bumble bee” paint scheme.

Other Used Bikes in Stock